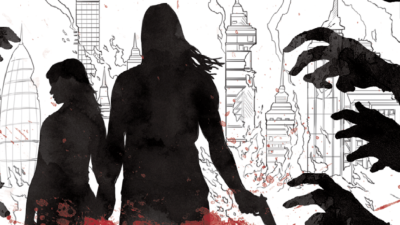 Reading time: not much.

First of all, thanks everyone for coming out to my run at DunDraCon 44, and a special thanks to Michele Picard (no relation) for agreeing to run the exceptionally large number of NPCs for that session!

So, I want to mention right off the bat that this isn’t a review. Whenever I sit down to write a review the tedium of describing all the procedures hits me hard at about 1,000 words. Also, there are a couple of perfectly serviceable review-type pieces here and here.

I mean, I guess if you really want my review it’s this: in a world crowded with Zombie properties, Magpie Games’ Zombie World stands out as a tightly focused RPG able to deliver a completely satisfying experience of hit shows like The Walking Dead. Go buy a copy. Or two. They seem like nice folks.

Okay, where was I…

Ah, right, after having run Zombie World a couple of times in a public setting, I have noticed a few things worth mentioning. Let’s start with the practical at the table stuff.

THE PRACTICAL AT THE TABLE STUFF

If you’re considering running with more than a couple of players, buy enough erasable markers for everyone. You get one with the box, but you should think of that as your GM marker. Each player gets a laminated character sheet that they’ll need to write on, especially during character generation. Running a big table with one marker feels comical at first, but it gets annoying.

Also, if you’re going to be playing a lot consider protecting your investment by sleeving your cards. Some of the decks get handled quite a bit during play. And, thanks to the foresight of the folks at Magpie, if you sleeve the cards everything will still fit in the box.

KEEPING THE PRESSURE ON

If you know ZW, you know there are two juicy sources of drama: the restless dead and the tensions among the characters. My first play was solid, the most antsy character ended up dying of a baby zombie bite inflicted while looking for printer paper, but all and all there was a surprising amount of “gosh darn it, we’re all in this together” camaraderie. Given that the characters in ZW are preloaded with angst, this isn’t really what the game wants. Half the game is about struggling against the inescapable pressure cooker of being trapped with strangers while your resources run out.

So during my second play I went for transparency and said at the beginning, “Oh, just lean right into all the trauma and interpersonal conflict. It’s what the game wants you to do!” Yet after starting the session with a nice stand-off between the Tyrant and the Prophet things drifted into a kind of begrudging homeostasis. Even under the influence of a bit of NPC fuckery I couldn’t budge the table off the feeling of everyone hunkering in their corner.

In hindsight I realize I could have done more with the NPCs. The enclave quickly evolved into the haves and the have-nots; it doesn’t take much to think that some dispirited NPC might leave the back door open to let the Zombies thin out the more powerful faction. (And, let me tell you, that more powerful faction.. those guys were jerks.)

Also, I’ve developed a mental model that I think will help me hit the correct level of tension to make ZW properly cinematic.

From now on I’ll visual the game with a couple of sliders: one marked Zombies and another Character Conflict. For the most part, the players set the CC slider. Even with “encouragement” from the GM, they are probably going to find a level of inter-character tension they’re comfortable with. But the slider I’ve got all to my own bad self is the one for the zombies.

If the Character Conflict slider is stuck at say 2 or 3, then I’ll push the Zombie slider up to 7 or 8. The restless dead will constantly probe the wire or otherwise wriggle in to unfortunate places. In a sense if the players aren’t interested in interpersonal conflict, I guess they are saying, “More Zombies, please!”

On the other hand, if the characters are at each other’s throats already, then the zombies can fade more into the background. They’re the thing that always makes you pay for a moment’s weakness, or more darkly, gestures of simple humanity.

THE THUMB ON THE SCALE

Neither one of my games ended with the fiery conclusion you might hope for in a one-off. Part of this is that both groups had big successes coming down the stretch, so under the rules you just have to give them that, and part of it is that I’m reticent to up the ante at the end just for the drama of it.

But you know, I might try it next time. I might just go for the big budget inhuman wave attack at the end. Maybe it’ll work. Maybe people will totally dig it, even if it seems a bit forced. In my experience role-playing is a hobby where folks love it when you give them what they want…

One thought on “Zombie World: Tips and Approaches from Actual Play”