My current game group is far too wonderful to let something like a global health crisis stop us from playing. But even if caution didn’t dictate social distancing, we’d still be under a shelter in place order. So, online we go into the sometimes bewildering forest of apps to help us chat, roll dice, manage our GMing, etc., etc., etc.

Like everything, there’s good and bad news here. The Good: we can play with our buddy Lex who moved to Finland last Fall. The Bad: playing over the internet is a very different experience.

I’ve been wanting to play Simon Carryer’s On Mighty Thews for a couple of months. My group had a blast playing a long campaign of Conan: Adventures in an Age Undreamed Of so pulp-fantasy is in our wheelhouse. Thews aims at creating the Conan short story feeling without all the “trad” game overhead, so I thought it would be a great fit for my first foray into online GMing. (As a bonus Thews is also open-ended enough to leave behind baggage from Howard’s writing that’s distasteful to a modern audience.)

After having looked at Roll20, I realized I wanted as slim a tech stack as I could find that would facilitate a story-driven game. Luckily I’ve got some good friends that pointed me in the right direction. Jamboard, Google’s shared whiteboard app, came to me by way of the Indie Game Reading Club’s Paul Beakley. My man MadJay turned me on to Roll For Your Party, a surprisingly robust web-based randomizer. Discord, which we’d already played around with, turned out to be our easiest chat option. 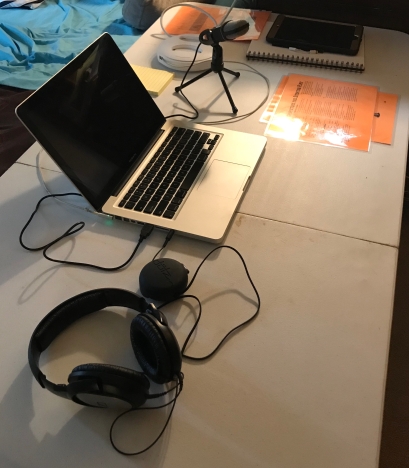 There’s No Place at Home

We were scheduled to play for about 5 hours split between two different sessions, so I needed to create a little privacy for myself. I couldn’t just sit at the kitchen table with my boy floating around our little apartment. Some tenants that moved out about six months ago left a folding table behind some bushes in our courtyard. It makes an appearance for social events, but with the lockdown I figured nobody would care if I borrowed it. After some significant cleaning, and discovering that one of the supports was broken, I managed to set it up in our bedroom. Add a padded folding chair and some headphones and I was good to go.

The Gang’s all Here

I’ve always been our group’s coordinator, and in some ways I found it harder to rally everyone for this than for getting together in person. I wanted to make sure all the players got a chance to try out Jamboard and Roll For Your Party. It was tough to figure out who had done that. One of our players took all week to send me his Discord handle, doing nothing to lower my general stress around doing something new.

But when 9am Pacific Time rolled around, I was soon graced with the sight of the old gang all in their little windows. (I do not find Discord particularly intuitive, so it took some doing to get everyone into the same chat.) Jamboard turned out to be an excellent fit… in no time people were making characters and doodling ideas onto the map.

The current group has been by far the most creative one I’ve ever belonged to, and they didn’t disappoint with On Mighty Thews. We ended up with an excellent batch of characters: A wandering executioner, a monk self-exiled from the Imperial City, a big game hunter, and a rather odd collector of flora and fauna.

One great piece of Thews technology is that each character has a defining Trait, an essential way of being. In our game these traits are Loyal, Obsessive, Merciless, and Disciplined. But the traits don’t just sit on the character sheet, they also go on the map as a defining feature of where each character is from. With that simple gesture the design of the game turns each character into an exemplar of their culture.

When a character plays toward their Trait for a scene, they get a token good for a re-roll in a later encounter; when they play against type they get to use a d20 (the biggest die in Thews) for one roll in a scene. Our monk used this second feature almost right out of the gate to impulsively chase some foes up the side of a crumbling ziggurat.

Far and away my favorite part of the first session was putting together the map. It’s a hodgepodge of drawing, found imagery, and pop culture. I’m hoping we can get more than one tale out of this set-up. I think the Iron Wastes, the Blistering Plain, and Termite City all deserve their moment to shine.

Every story game I’ve ever played, going back to first time I facilitated Fiasco, requires a leap of faith. Maybe it’s just my lack of finesse with this type of gaming, but I find there’s always a falling off of energy between character creation and actual play. Thews was no exception. The map looked excellent, everyone had a firm grip on their character, and then it was time to Play to Find Out.

The Crumbles, supposedly home to a mysterious but powerful creature/construct, seemed a natural place to start. After a brief scene where I hoped to get everyone interacting in character a bit, I thought screw that. This is a game where character is revealed through action. And then it hit me. Let’s turn this into a race. So, I threw in some evil monks running ahead of the PCs to get to our mysterious creature first. After a quick and brutal fight on the crumbling steps of a ziggurat, the party was just on the cusp of delving into deeper mysteries when we had to wrap up for the week.

But we had begun…

There are of course advantages to playing online. Images are easy to share back and forth. Some of the in-game information is easier to push and pull from the players, like names. I’m such a stickler for the spelling of names, and suddenly they’re dead easy to send, drop in a document, etc. All that data flows with the push of a button, but a role-playing game is a lot more than that.

For me the true content of the game isn’t the plot, it’s about the feelings that the experience creates. Both the emotions of the characters, and the moments where the players feel something, too. It’s tough not to notice how compressed that bandwidth is when gaming online. I’ve spent a lifetime at the table learning the subtle cues of the players, are they leaning in… or is someone just reaching for their phone? Is that smile on the edge of someone’s lips wry enjoyment, or the precursor to an annoyed snarl? Not all of that goes out of the window when you’re playing online, but a lot of it does.

So, that’s the challenge then, right?

To take technologically mediated gaming for what it is, push past the limitations, and arrive back at the felt experience of the story.

It’ll be hard… but so is everything else right now.

One thought on “My First Online GMing, by Crom, with Simon Carryer’s On Mighty Thews”