If you haven’t read any of my previous posts from this series, I’m playing The Mecha Hack, an OSR take on BattleTech style games, with my wife and my 7-year-old son, Xander.

We’re using the off the shelf Mech Hack “mini-setting.” There are three main factions from Old Earth. Our scrappy heroes, Thumper and Starian, belong to the Terran Collective. The Collective is made up of farmers and workers who have only recently thrown off the yoke of the NeoDominian. The ND are your far-future feudalists in space. Their power is waning, but they still have lots of resources.

The final faction, the Aeonic Primacy, is the last group of colonists from Old Earth. For centuries they were thought lost, but they’ve recently reappeared. They use alien technology, and their agenda is unknown. One thing is clear, though, they seek to destroy both the ND and the TC.

Our story picks up after Episode 3, in which Thumper and Starian traveled to the NeoDominion stronghold, Fortress Husqvarna. During talks with the ND leader, Princess Ilana Acheris, a rogue Duke attempts to kill them all. After the heroes foil this assassination plot, the Princess agrees to work with the Terrain Collective to fight back the threat of the Aeonic Primacy. 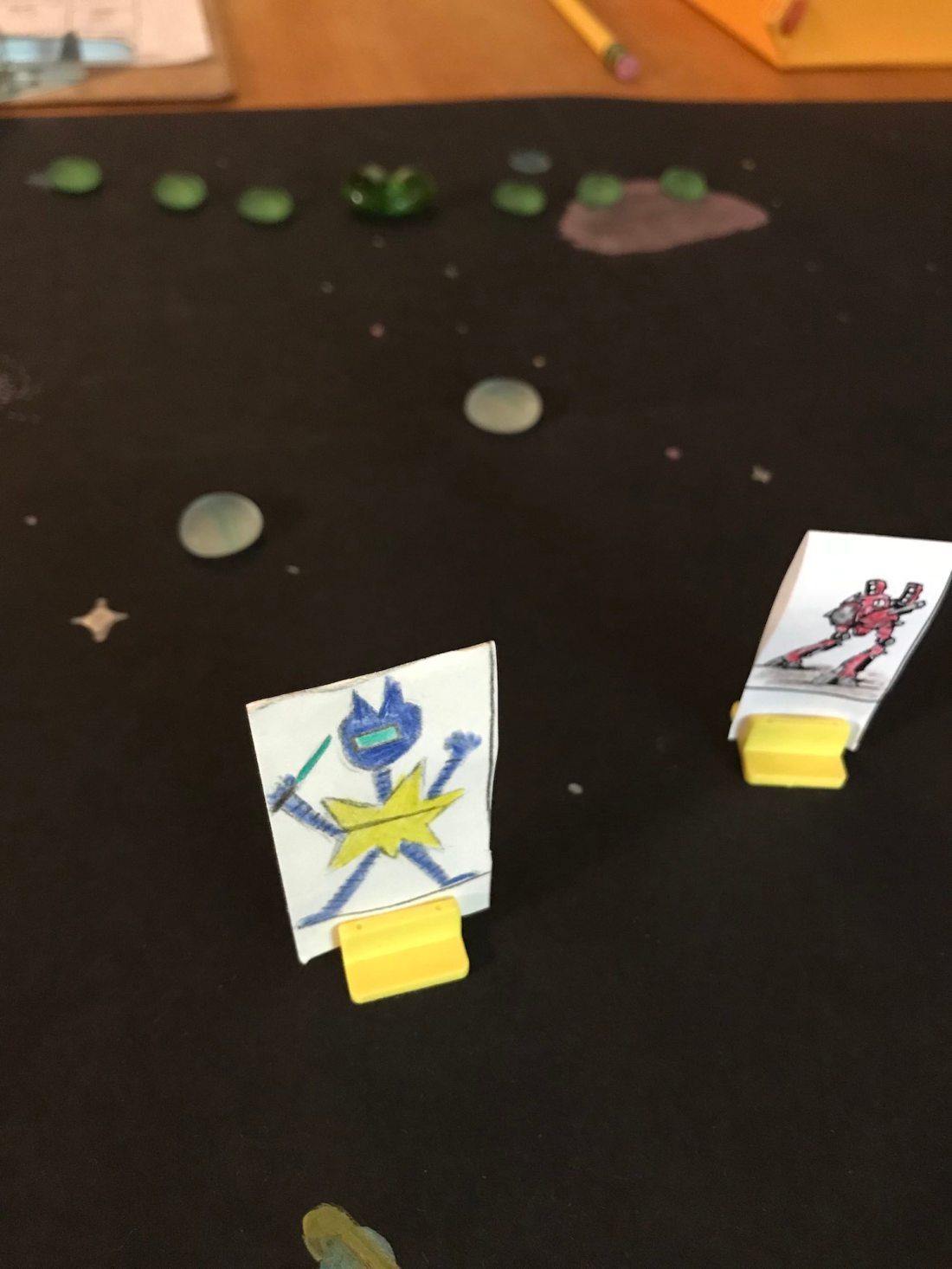 After parting with the Princess on the most friendly terms, thanks to good role-playing and an excellent Presence roll, our heroes wait outside Fortress Husqvarna for their ride home.

The ride appears… but a few beats later so does an Aeonic Primary fleet! Thanks to a nice Systems roll, Thumper is able to warn Fortress Husqvarna of the danger. Within moments our heroes are caught in a withering crossfire. Their ride home takes a direct hit, and escape pods scatter from the burning hulk.

To make matters worse, a squad of spider-shaped Primacy mechs break off and head in their direction. Starian snatches up a couple of the escape pods and readies for battle. In the ensuing fight, both Star (Starian’s mech) and Thumper take a lot of damage while protecting the escape pods.

The main threat, a large Primacy mech, slips pasts them unscathed. It speeds toward Fortress Husqvarna on an unknown mission…

Here’s a case where I’m learning to balance my encounters better. (Ed note: See Episode 2!) I could have had that larger Primacy mech engage them, but it would have been a bloodbath at that point. Besides… it had other things to do, which I’ll get to below.

NOTES FROM BEHIND THE SCREEN

We paused our session here.

I knew I’d want to switch from the cool star field that my family drew over to a map of the guts of Fortress Husqvarna. And, since all that stuff was still vague to me, I decided we’d get back after I’d had more time to plan.

As a little bonus for their patience, I did let them do part of their leveling up process. Level 3 is special in Mecha Hack; you get a hit point bump and a chance to increase stats as always, but third level also gives you the ability to add a new module. Modules are cool widgets that allow your mech to do more or different things.

Giving them entirely new abilities in the middle of a running battle felt odd, but having them benefit from recent experiences didn’t. Also, I realized they’d need every hit point they could scrounge in the coming battle.

Leveling up stats in Mecha Hack is fun and dramatic. You roll each of your four abilities and if you get a higher result, then that stat increases by one. My wife was bitterly disappointed that she didn’t increase her subpar Power stat, which controls how easily a mech hits. Xander, who’s inherited my luck with dice, managed to improve every one of his stats. His already ridiculous Power stat is now a 17 out of 20.

After a break of a few days, we got back after it…

When we picked up again, I’d drawn up a rudimentary map to represent the power plant of Fortress Husqvarna. In a more elaborate version of this game, I would have had all sorts of corridors with booby traps set by the Aeonic Primacy, and defense measures of the Fortress itself.

I’ve discovered over the years that people just want to cut to the action. And although I’ve never tested this out, I suspect it’s even more true of 7-year-olds.

I did set things up so that the hatch our heroes needed to use to get into the Fortress was booby trapped; the advancing Aeonic Primacy forces had laid a spider web of energy across the opening. Thumper discovered the trap was designed to overload a mech’s reactor. (In game terms each player character mech has a reactor with a certain die type. The larger the die, the better the reactor. The trap would force a reactor die roll, potentially using up part of the mech’s valuable power supply.)

Thumper started to disarm the trap, but Starian just decided to plow on through. (As usual, Xander rolled well enough to avoid ill effects.) Thinking like a good mechanic, Thumper harvested the trap for possible later reuse.

At that point we jumped ahead to Starian and Thumper creeping into the Fortress Husqvarna engineering section. They see the Aeonic SpiderMech weaving a web of energy around the glowing power core in the center of the room. After a few System rolls, some made and some missed, Thumper works out that the Primacy aims to either steal or disable the core, leaving the vast station defenseless against the fleet outside. 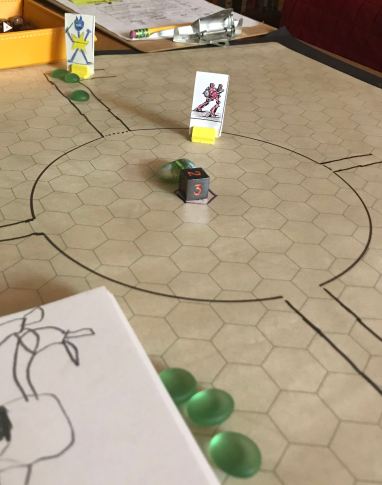 PUTTING THE BALL IN THEIR COURT

So, here’s the dilemma for our heroes. They’ve already been roughed up in a previous engagement, and they’re facing a completely fresh mech of their own power level, and it’s doing something they don’t know how to stop. A frontal assault is an option, but not a good one. (The big SpiderMech has a half dozen small Spiderlings protecting and assisting it.)

In order to add some urgency, I put a d6 on the power core and say, “Ok, this is on 6 now, for every couple of actions you get, it’ll go down one. When it counts all the way down… something very, very bad is going to happen.”

I check in with my players. They get it; they know what’s at stake.

Thumper cloaks, and manages to draw one of the Spiderlings away. Then she sets up shop inside the power core while still camouflaged. We talk about her options and she decides to try to hack into the communications controlling the Spiderlings. My wife grimaces, remembering many past failures in big moments like this. She rolls, and it’s a 1. Critical Success!

I’ll confess, I was kind of hoping that she would turn the Spiderlings against the SpiderMech (Wife Note: Oh. Right. That would have been a good idea.), but she did something almost as effective. She sent them out of the core into a corridor with a waiting Starian. He started taking them on as they came at him in ones and twos.

With the Spiderlings occupied, Thumper was left with the conundrum of what to do with the big SpiderMech. The count was down to 2 at this point, and things were looking desperate. As the GM I thought, well, if this goes south, this campaign is going to get turned on its head. I had visions of Princess Ilana bringing her court to the Terrain Collective hoping for succor.

Thumper had the idea of engaging the SpiderMech directly, and I paused things for a moment to let her consider her options. She decided to hack into the engineering controls to try to spike the power core. I loved it. It put the whole thing in her hands. A critical failure, and she’s done the work of the Aeonic Primacy for them. With a success, she’d at least slow the process down… perhaps giving enough time for reinforcements to arrive.

With the future of the NeoDominion in her hands, my wife picked up the d20, and let it fly. Another 1… another critical success! We worked out a narration together where the Spider Mech gets drawn into the seething energy of the power core, and just can’t get out. (Getting drawn into a mass of energy is starting to become a theme in this game.)

Needless to say, after my wife’s well-documented critical failures, she was ecstatic. My son was “really proud of her,” which is an honor not often bestowed.

LET ME UPGRADE YOU

So once again a grateful nation, in the person of Princess Acheris, bestows their gratitude on our heroes. I asked them to create a name for the highest honor a person outside of the NeoDominion could get, and Xander came up with The Order of Peace and Justice. Xander went on to describe that it’s a wreath of made of olive branches. I added that it’s a sculpted metal version that magnetically attaches to their mechs… to be worn for dress uniform occasions.

Also, the Princess threw open their mech forge so that our heroes could have whatever upgrade they wanted. (It was nice to work the new modules I mentioned above into the story-telling.) Starian chose Super Reactor again. He’s intent on turning Star into the Energizer Bunny of mechs. As a bonus, the ND engineers took the tech from the EMP trap and upgraded Starian’s sword, giving it the quality Arc. This fits perfectly with Xander’s design intentions. Arc allows the user to short out a mech they hit for a round if they’re willing to risk rolling their own reactor die.

Thumper picked the Targeting System module. (My wife’s chief frustration with the game is her inability to hit anything with her low Power score. The new equipment allows her to roll with advantage on attacks if she makes a successful System roll, which is her strong suit.) When the “smiths” at the mech forge saw her choice, they added a targeting scope to Thumper’s gun giving it the Sniper quality. (Creating another option for generating advantage on her attack rolls.)

Despite wrestling with low motivation and a simple lack of energy, I thought this split session came out quite well. I could have pushed on for a longer session in the middle, but I’m glad I didn’t. I had to tell myself, what’s the rush, we have all summer!

I’m also starting to get a nice comfortable grip on the game. There were some pleasing moments of wrapping the mechanics around the story-telling. I suppose that’s what you hope for when playing OSR-style games. I’m also finding lots of moments to employ the “rulings not rules” philosophy that I’m told is part of the goodness that powers OSR fun.

As I ponder my next move, I think it’s time to bring our heroes back home. They’ll find some nice surprises waiting for them…

One thought on “The Mecha Hack Actual Play Ep. 4: Ambush!”