It’s been awhile since I’ve done a round-up, but there’s a lot of a little bit going on these days in my gaming world…

Just when I was thinking it might be fun to try to add another weekly game to my life, my buddy Brian Isikoff mentioned he had an opening in his Clement Sector game. Clement Sector uses Cepheus Engine, and it has an old school Traveller vibe, right down to those 2d6 rolls. For what it’s worth, Cepheus is a fully developed free rules set.

Brian runs the game audio-only, which is new to me. I really liked it, except that it was tough to figure out who was playing what. It’s not easy to take in a bunch of new voices and map them to both a real name and a character name!

In the game I’m playing Mansiri, the uplifted “yeti” astrogator. Someone else played him first, so I figured I’d better give him my own spin right out of the gate. The character came with a harp, and a chip on his shoulder because humans won’t accept him in academic circles. So, my shtick is, “When you look like a Yeti, you have to remind everyone how civilized you are… constantly.” That’s been a lot of fun. Mansiri is kind of morphing into my version of Fraser.

I had the most absurdly good dice luck with him up until the end of my second session. That’s when Mansiri crit-failed an astrogation roll. Yep, things are going to get interesting.

Oh, I’m burying the lead! My friend Jen gave us her old monitor. So, for the cost of a Thunderbolt-to-VGA adapter, I’ve got a second monitor for gaming. It’s not a big, but it doubles the screen area of my laptop. Woot! I tried it for the Clement Sector game and it makes a big difference. (And, it means my wife will have a second monitor when teaching starts up again.) 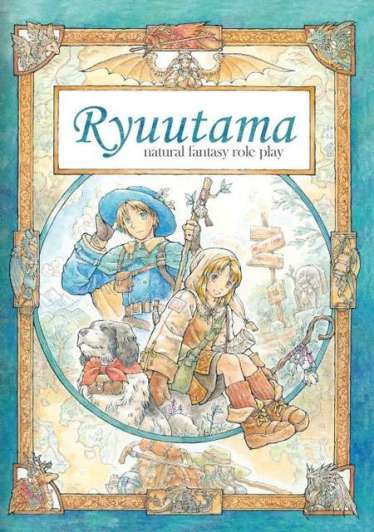 Games with Xander and Deanna go on, but never quite at the pace I would hope. Still, I feel like getting a session in every week to 10 days is a torrid pace for COVID times. Somehow we are already coming to the end of Xander’s summer. I’ve gotten the Prince Valiant game into a good spot for a pause, and I want to do the same for The Mecha Hack. Just today Xander held up one of the LEGO builds we use for Mecha Hack and said, “Daddy, when are we going to play this again?” Happily my answer was, “Saturday!”

I’m starting to read up on Ryuutama. Paul Beakley over at the Indie Game Reading Club mentioned that he’d love to get it up and running with his family, and it reminded me that I’d picked up a lovely hardcover of it in The Beforetimes.

It’s a neat design, and since it’s a product of the Japanese role-playing industry, it’s got a vibe that’s pleasingly out of phase with what I’m used to.

Here’s a write-up from the publisher that does it justice:
Ryuutama is an RPG developed in Japan by designer Atsuhiro Okada. It is set in a world where the “NPCs” of the village–the bakers, farmers, shopkeepers and healers–set off on a wonderful adventure exploring a fantasy world together. Some people colloquially call it “Hayao Miyazaki’s Oregon Trail”, because of its heartwarming (in Japanese “honobono”) feel of family anime, and its focus on traveling and wonder over combat and treasure.

I have no idea how long it would take me to prep it for a home game, but reading the rules is always the first step!

All the different (5E) D&Ds

Yeah, we’ve been doing a lot of D&D in my main group lately. It’s the easiest thing to pull together, but I’m getting that itch to try other games. (About which more later.) Brian C. has been running his Vale game for us, though traveling for work forced him to put it on hiatus. Since then it’s mostly been Aaron polishing up his Roll20 skills running Icespire Peak. Then last weekend, Zach hopped on the learning curve by debuting a module he put together for the RPG Writer Workshop, and GMing on Roll20 for the first time. His module was set in Eberron, and his deep love for the setting shined right through.

I’m the last in my group to even attempt Roll20. With needing to look after Xander and keeping up with the blog, it’s just hard to find the time to dig in. I can either run games, or tackle that Roll20 interface, but doing both seems like an uphill battle.

I might try to develop my chops by running Jon Hodgson and Jacob Rodger’s Beowulf-inspired adventure, The Hermit’s Sanctuary. It’s a duet 5E D&D game, so I’d run it with my most experienced Roll20 buddy, and then if I screw up I can stop and get it right! It’s not that I mind messing up behind the screen anymore, it’s just that I want to minimize the amount of other people’s time I waste.

I’ve been thinking a lot about putting something together for the gang that doesn’t require a complicated online backend. Here are the choices I’ve put to the group:

I had a great, great time running The Black Hack with Zach a few weeks ago, and I’m interested in exploring it further as an OSR campaign engine.

Everybody from the group voted and the choices have come out remarkably even. I think I’ll go back with a weighted voting scheme and see if that creates more clarity. In any case, it’s not urgent. I’m going to have to put some serious work into getting any of those campaigns off the ground.

I’ve also been reading M. A. R. Barker’s Empire of the Petal Throne. It’s fascinating to engage with something from TSR’s early years, before D&D became the main brand. Brian C. and I are joking around about playing Petal Throne with the 2d20 engine. But, you know, maybe? It’s a fascinating pulpy setting, and very much its own thing.

Anyway, however things shake out with all these projects, you can be sure we’ll still be out here gaming…