Content advisory: lurid violence, torture, guns and more guns, also… racism and sexism, but perhaps less than you might think. 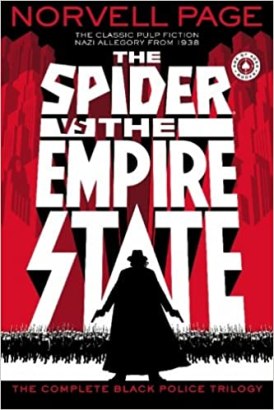 In the waning months of 1938, America was balanced on a razor’s edge. People who were reading the newspapers could tell that Nazi Germany was quickly becoming a global problem, but Mussolini was hailed as the man who “made the trains run on time.” Still mired in the Depression, many Americans started to wonder if the tools of fascism could cure the ills of society. Groups like the Black Legion, an offshoot of the Klan, the Silver Legion of America, and the German American Bund held rallies and actively espoused fascism.

In October ’38 the first novel of The Spider vs. The Empire State saga, The City that Paid to Die, dropped into this seething cultural cauldron of hope, fear, and desperation. The Spider, aka millionaire Dick Wentworth, had been a staple of pulp novels for years. He’d contented himself with mowing down thugs and masterminds with his twin .45 automatics. But that all changed. The first of the “Black Police” trilogy saw the spider confronted with a conspiracy so big and far-reaching that he literally couldn’t tackle it alone. It was no less than a complete co-opting of the New York State government by a shadowy figure called only the White Face in the Mirror*. For the first time the Spider needed help.

The results are no less than a guidebook for a hard-driving, no holds barred pulp campaign. Most modern pulp gaming is slightly whimsical. It features what are essentially low-powered superheroes, or at least super-skilled individuals, battling often outlandish villains. The Spider is a whole different animal. It’s your granddad’s hard-R content. It’s Birth of the Resistance Age meets early Frank Miller. It’s hard-as-nails fascist-punching liberation theology preached from the barrel of a gun.

Wentworth laughed harshly… He had risked everything a hundred times in battles against the underworld, but now the situation was reversed. The underworld was on top. It was in the saddle, in complete control of state and city machinery. And, ironically, it had been the people themselves who had put the criminals in power!

The thing that strikes one early and often is how author Norvell Page captures the cruelty of a police state. My understanding was that Americans were ignorant of a lot going on in Europe before we entered the war, or that soldiers were astonished by the concentration camps. But Page paints a truly despicable, and in many cases, eerily accurate account of Nazi practices. Anti-semitism is not depicted, but the concentrations camps, with their barbed-wire, machine gun nests, and hopelessness are on full display. The Black Police themselves, probably named after Mussolini’s Black Shirts, or possibly the Black Legion mentioned above, are utterly depraved bastards. They lynch shopkeepers, flog their victims to death, and execute their enemies after show trials.

But right along side this insanity, in typical pulp fashion, you’ll find high melodrama. Dick’s relationship with Nita Von Sloan feels straight out of a 1930s weepy. They love each other, but how can they ever truly be happy?

So, I can’t stress enough that if any of the things in the content advisory above bother you, this book and any derivative campaign will not be for you. This is the grimdark underbelly of pulp fiction.

If your players are unfamiliar with The Spider vs. The Empire State, and they are down for a dark game, you can just use the book as campaign guide. Of course you need not slavishly recreate the events, but you should be able to mix and match moments to suit your taste. Maybe watch a show or two about staging a righteous rebellion for inspiration. American pop culture never tires of this theme: The original V, Red Dawn, Fallen Skies, and probably many more. The novel switches back and forth between the rebellion’s brute force approach and the political angle… you can wring a lot of good gaming out of that. Put the characters in positions where they have to choose between helping a few people in the short term or the masses in the long term. Always show that the Black Police will lash out at whomever they can with their reprisals, the less deserving the better. And, of course, emphasize the almost protean nature of The Master (aka The White Face in the Mirror), his slipperiness, and his endless schemes.

In the unlikely event your players are familiar with the novels, you should be able to switch up events, names, and places to suit your ends. You could easily set your game in 1930s Los Angeles, San Francisco, or any other big town. Remember that there were a lot of cities on the eastern seaboard that were more vital in the ’30s, like Buffalo and Baltimore. If you do relocate it, I strongly recommend choosing a city covered by a WPA Guide. (In fact if you’re sticking to New York, you should check out the New York Panorama; a Comprehensive View of the Metropolis, which was published in 1938!)

Also, if you’re going to wrestle with period pulp material, there are things you’ll want to modernize. I suspect Ram Singh, The Spider’s loyal Sikh sidekick, is meant to be a sympathetic portrayal. So we’ll say, nice try 1938, but we’ve moved on. Whatever sort of team your players put together—and you’ll need a team, right?—make sure that even a sidekick character has agency, and doesn’t fall into the racist or sexist tropes of the source material.

Nita Von Sloan’s character makes an interesting case study. She’s no cypher. At various times she takes over the rebellion when the Spider is in the field, and even breaks open a concentration camp once to rescue him. Nita is an accomplished pilot. She even “disobeys” the Spider and ends up assisting him in an air duel with three bombers speeding towards a vulnerable dam. (If you had to read that last sentence twice… remember, it’s pulp!) On the other hand, she falls into Dick’s arms a lot, and when he’s around she usually lapses into passivity.

Certainly a group of masked avengers would work if you’re putting together a party, but broaden this to include heightened versions of real people that would have existed: a tough as nails nurse that saw it all in the Spanish Civil War (still going on in ’38), a woman who’s an up-and-coming reporter on the political beat, etc. Go beyond the group of 5 white guy characters; you can make cooler choices than that. 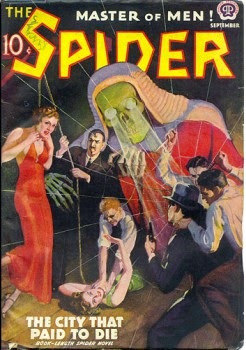 It should be obvious that there can be pitfalls to playing with vintage pulp material. That doesn’t mean it shouldn’t be done. If you approach your game with a modern sensibility, then there’s no harm in exploring a time defined by cultural sturm und drang.

Why not wrestle with the difficult decisions of another era, and take a few hours off from the tough choices of our own?

One thought on “Gameable Fiction – The Spider vs. The Empire State”