Hunh, turned into kind of a big week around here when I wasn’t looking!

So I guess it took a pandemic to do it, but you can find me on my first ever podcast this week. MadJay Brown and I have been whiling away our Tuesday nights in the seedy meta-human underbelly of Spokane, Washington.

My family lived in Spokane for awhile, and I think it is an underused urban location for stories, so I’ve been getting a huge kick out of using it for Ron Edwards’ Champions NOW. Listening to the pod you might think I didn’t like Spokane, but I did! It has a down at heel rustbelt appeal that I find irresistible. I used to walk my newborn son all over downtown and Browne’s Addition, and spent a lot of time in surprisingly lovely Riverfront Park.

Anyway, you can hear the edited down version of Episode 1 of Big Damn Hero here. However, I encourage you to support MadJay’s Patreon so you can hear the De-Luxe version of the session at some point. In any case, there are not a lot of people of color in the TTRPG space, and his is a voice worth hearing.

Notes on How to Host a Dungeon: Pros & Cons

If you read my piece last week, you know I picked up a big set of solo games through Bundle of Holding to strip mine for things to play with my son. (Now that the boy is homeschooling I have comically little time for game prep.)

Exiles of the Wicked Maze went so well last week, that I decided to give How to Host a Dungeon a spin over the weekend. So, my wife, son and I got out lots of tokens and markers and went for it together.

The idea of Host is that you use random procedures to create the deep history of an underground “dungeon” environment. There’s a lot I like about Host, but there are also a couple of things that didn’t work for us, which I think are worth pointing out.

The early rounds were a lot of fun for me and my son. (My wife had her own thoughts. See below!)

Things started out well enough. As you play Host you develop a map. There are four different Ages, so as you get further into the game you use tracing paper to see the new reality deposited on top of the old. It has the pleasing quality of archaeology in reverse.

My wife just didn’t dig this game at all. She kept saying it’s crunchy in all the wrong ways. I think I understood what she meant. There are very specific procedures for many things, but then when you need to know what to do in a particular (and common) situation, you end up just making something up that seems reasonable.

For example, there’s an Age of Monsters where you populate the board with randomly selected dungeon denizens and play to see which one outcompetes the rest. And there’s a healthy variety of possible moves and approaches for each creature, but you inevitably find yourself with a lot of questions. Does the entire population of a monster group always move en masse, or can they split up? Do creatures take their treasure with them when they move? What happens to a creature’s treasure when that creature is wiped out? And, etc.

How to Host a Dungeon sets up an expectation for a certain kind of rigor, and then leaves you scratching your head. 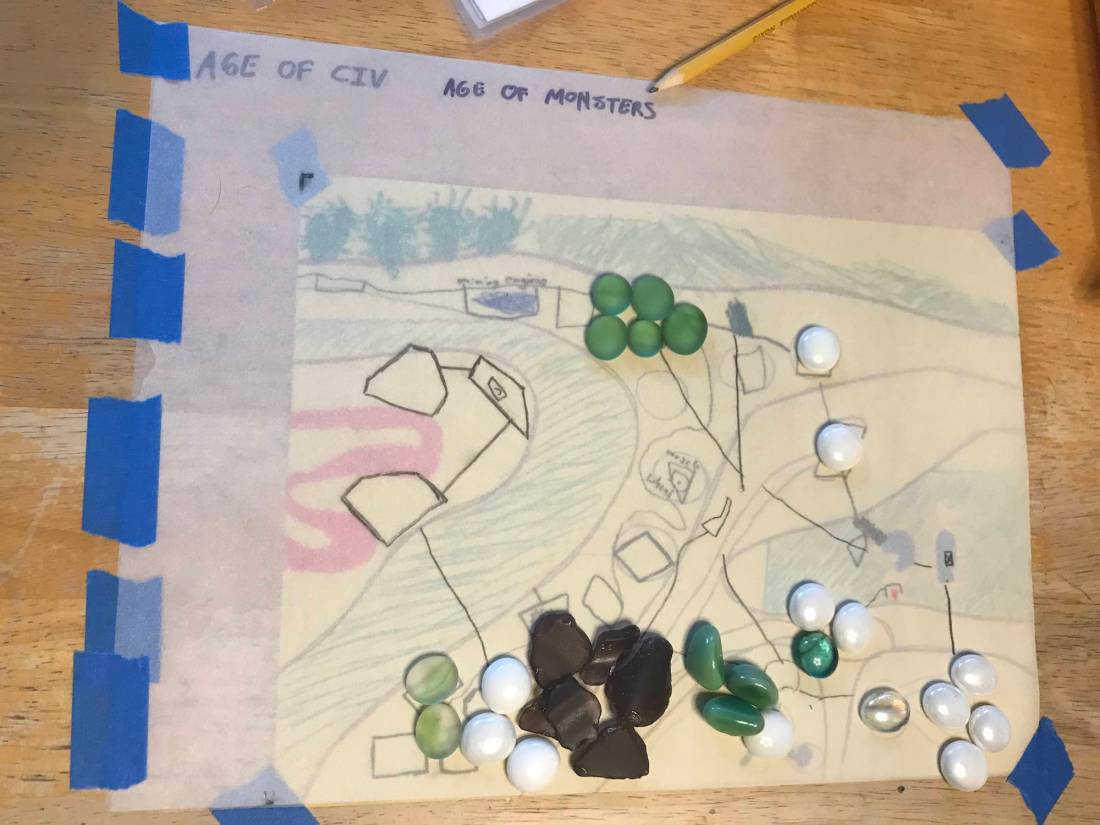 Having said that, at least Xander and I enjoyed the first three phases of the game. The Primordial Age, where you set up the different strata and the resources in them, was good fun with dice and markers. The Age of Civilization was engaging, but also puzzling. The game recommends that you start with the Dwarven Civilization on your first run, but doesn’t seem to envision the possibility of having no ore or gems on the board for them to exploit. (In our game, until the Dwarves developed enough technology to take advantage of biomass, it felt like a game of Stupid Dwarves, Why Did You Come Here?)

There was something pleasing about populating the dungeon in the Age of Monsters. Tokens and factions everywhere! We were surprised when the Wizard didn’t last long. It was the old, old story… done in by Ooze before he could build up his resources. We played until the Orcs managed to breed enough to trigger the Age of Villainy.

In the Age of Villainy the monster that’s either collected enough treasure or built enough population becomes the dungeon’s boss monster. As the Villain it moves around “corrupting” different strata, but only after it’s removed all the other monsters from that patch of earth. It either corrupts the entire map or dies trying.

For my money this is the only serious flaw in the game.

Effectively you’re playing the Monster phase all over again, but this time with more grind and less novelty. We looked at each other when the realization hit us, and decided to pack it in.

I’d love to see this game return with a stronger last act. The other three ages each have their own special feel, and my instincts tell me that How to Host a Dungeon can and should have a better finale. 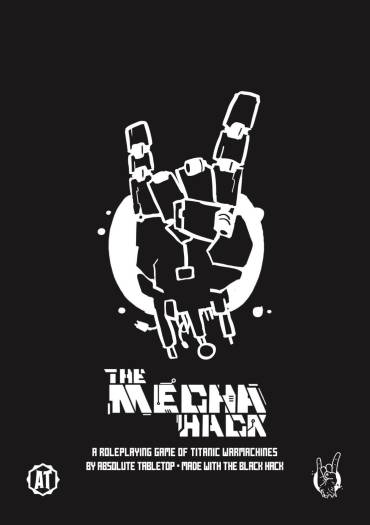 Somewhere along the way I discovered that the BattleTech: Activity Book was Pay What You Want on DriveThru RPG. With a “suggested” price of zero dollars I couldn’t resist. My son has shown no interest in doing the activities, which frankly surprises me, but now he is very into Giant Fighty Robots. Well played, Catalyst Game Labs!

Anyway, when my son dug out the ’90s BattleTech Boxed Set I thrifted a few years ago and pawed through it, my wheels started turning. I’ve played BattleTech once, or maaaaybe twice, in my long gaming career; it hit me right away that neither of us is in a position to learn it right now.

Then I remembered that last summer I’d started prepping The Mecha Hack with the idea of introducing it to him then. It’s a rules-light fighting mech game that’s just 100% where he’s at right now. (He’s got lots of ideas for Starian, and his mech, Star.) As a bonus, playing Mecha Hack will teach him some core traditional game scaffolding. He’ll get to know all about initiative, cover, advantage/disadvantage, etc., etc., etc.

My old beat up BattleTech set still has a reasonable number of standees… and I figure these will be used for the bad guys. The boy is adamant, to the point of tears, that he wants to customize his own. Mecha Hack comes with a set of printable standees… maybe he’ll pick something to color in? Or it will be a long process…

I was disappointed that the old BT set is sans maps, but then that’s thrifting for you. Savers can’t be Choosers. Then it occurred to me that I could raid my OGRE Designer’s Edition for lovely maps and all the 3D SF-themed bits you could ever want.

I think it’s going to be excellent. Here’s a demo I threw together… 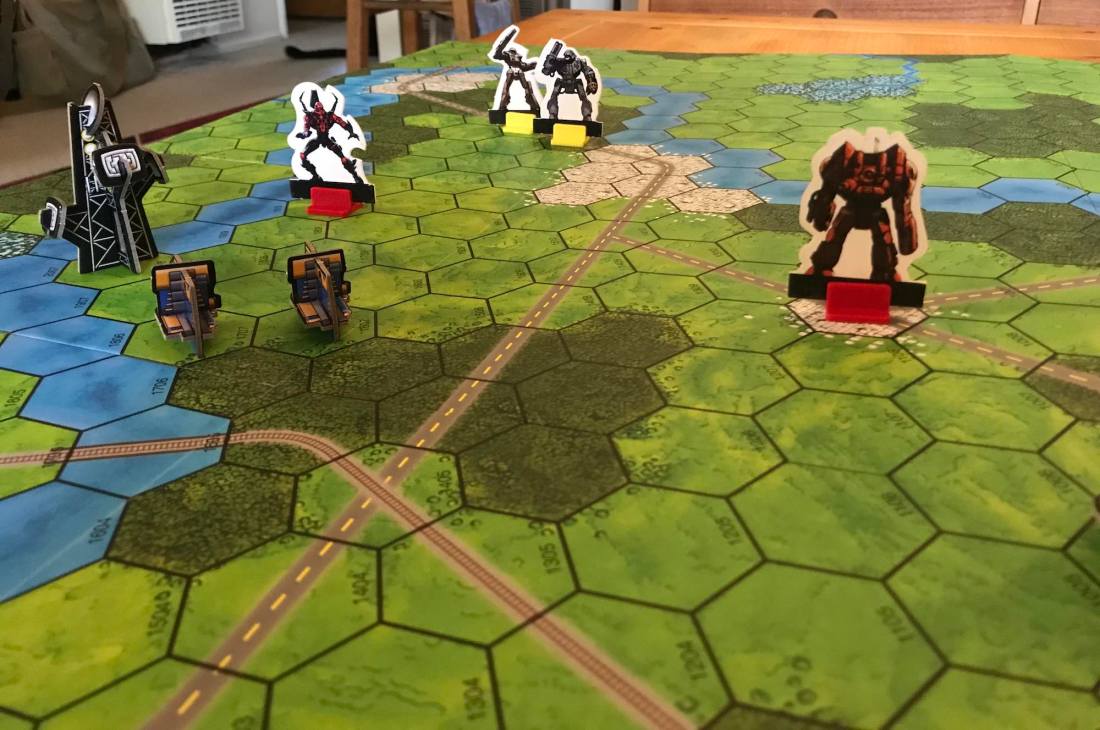 If only I knew anything about BattleTech. At least it’s part of the culture I’ve been soaking in for the last REDACTED years. I’m sure I’ll find a way to get by :)!

2 thoughts on “Weekly Round-up: My Podcast Premiere, BattleTech/The Mecha Hack, We Play How to Host a Dungeon”