Thanks for spending some of your lockdown time to check out my weekly feature, Irreverent Reading! It’s where my son and I read every word of the Monster Manual, dreaming and opining about what we find.

Homeschooling continues with enhanced online content. Sadly, I was really enjoying the Montessori Lite approach I was taking with Xander, so this week involved the trauma of change, along with building some new routines.

Still the steady beat of Irreverent Reading goes on. The boy’s reading skills continue to advance: he sight read the word camouflage this week, along with a few other stumpers.

And here’s what we read about…

Galeb Duhr. Neat monster. It splits the difference between trap and guardian. It doesn’t seem vicious in any way—I mean look at that illustration!—but it will definitely run the PCs off its patch if it can. An encounter with one of these will be a Rorschach test for your party… do they try to beat it in a straight fight, or do they take advantage of the Galeb Duhr’s willingness to happily “share information regarding its environment” with creatures it doesn’t find threatening?

(This was my odds on favorite to be Xander’s illustration for this week, but nope, he surprised me. See below.)

Gargoyle. My favorite part of this listing is in the green text block usually reserved for variant rules. We discover that the dread Gargoyle is a byproduct of the Prince of Elemental Earth, Ogrémach’s, mere existence. Wherever Ogrémach treads it imbues the broken rock “with slivers of sentience” that eventually form “humanoid rock formations” that become “the hard, cruel shapes of gargoyles.”

Genies. These just didn’t do it for me. It feels like there’s some awkward stretching merely to tick the earth-air-fire-water boxes here. That said the Marid is nifty. Just don’t try to get one anywhere near a conch shell.

Ghouls/Ghasts. Just when I think Xander isn’t giving the reading his full attention, he’ll pick up on a really subtle detail and point it out to me. I would have missed this: Elves get a special immunity from paralyzing Ghoul claws, but the Ghast is a different story. No one is immune to their higher-powered ability.

I’m filing away the Ghast-lead Ghoul hoard for a nice juicy encounter someday. Or maybe even a whole mystery that leads to nastier and nastier undead masters…

Giants. I found myself surprised with how much I loved the Giants! It would have been easy to just mail this in, as with the Genii, each Giant bigger and blander than the last. But no, there’s surprising nuance here, and clear approaches and agendas for each.

My 100% favorites are the Stone Giants. At home they are content and contemplative crafters…
In their dark, quiet caves, stone giants wordlessly chip away at elaborate carvings, measuring time in the echoing drip of water into cavern pools.

But, intriguingly, the world outside these caves isn’t real to them…
Stone giants view the world outside their underground homes as a realm of dreams where nothing is entirely true or real. They behave in the surface world the way humanoids might behave in their own dreams, making little account for their actions and never fully trusting what what they see or hear… Killing prey or sentient beings is no cause for guilt in the dreaming world beneath the sky.

Brilliant. Just brilliant. This is a concept worth stealing for other monsters, and other games. The idea that a people act one way in their home territory, and quite, quite differently elsewhere is fascinating, and worth working endless variations on. 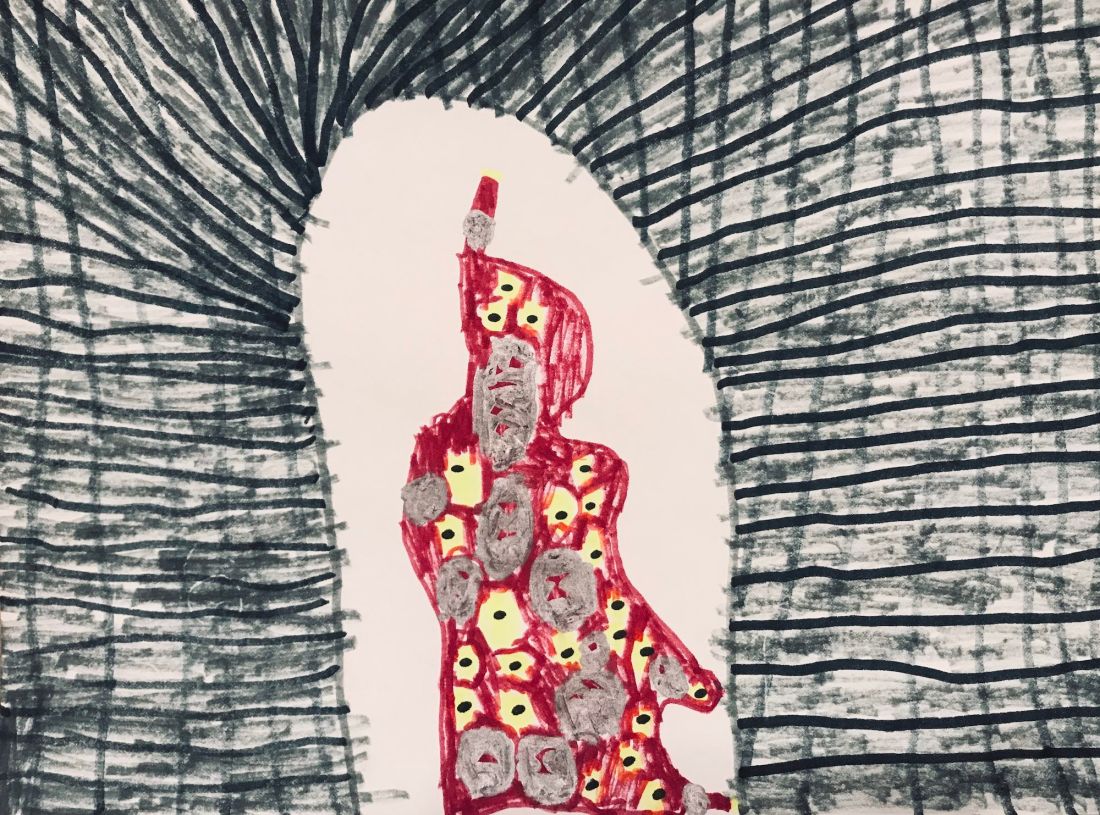 Gibbering Mouther. This thing is just yucky, so naturally Xander giggled his way through the entire listing. As a side note I’ve been reading him a book about the Incan Empire. Beside the amazing Incan art he’s very interested in hearing more about: (1.) a society with decapitations, and (2.) hallucinogens. He’s 7, so I soft-pedal this stuff. Still during bath time a couple of nights ago he basically described the idea of what a tripping Gibbering Mouther would look and act like. It was hard not to laugh. This is thinking I don’t particularly want to support, but still, it was damn funny.

As a threat the Mouther isn’t especially tough, but they keep you on your toes with saving throws. It forces 4 different kinds of saves with its various abilities and attacks: 2 Strength, 1 Dexterity, and 1 Wisdom. The more crap you make those PCs roll, the more likely they are to blow something.

In a fetid swamp the PCs stumble across a Mouther; it sloshes up out of a stagnant pond to attack them. Not pleasant, but no big whoop. Then they realize that it’s just one of many pseudopods coming out of the pond… and that the entire depression isn’t filled with water, but with one gigantic Gibbering Mouther.

How did it get so big? Well, maybe a local death cult has been sacrificing to it for generation upon generation.

Gith/Githyanki/Githzerai. I remember well the Fiend Folio hitting the shelves at Macon Mall’s B. Dalton Books. If I focus I can still summon the particular tang of aging paper that store had. I can’t remember much about that Githyanki other than they made an arresting cover image, but what’s here in the 5E Monster Manual is solid stuff.

Sometimes when a creature’s write-up runs a little long, as with the Gith, the authors end up letting their hair down, and opening up interesting story possibilities.

For starters, the Githyanki and Githzerai both have rituals/traditions around hunting Mind Flayers, so I think the D&DVerse has a lot more Illithids than I originally thought! There’s got to be some serious year over year attrition in the Mind Flayer community.

The best stuff about the Githyanki gets in just under the wire in a section called Outposts of the Mortal Realm. I’ll reproduce it in its entirety:
Since creatures that dwell on the Astral Plane don’t age, the githyanki establish creches in remote areas of the Material Plane to raise their young. Doubling as military academies, these creches train young githyanki to harness their psychic and combat abilities. When the githyanki grows to adulthood and slays a mind flayer as part of a sacred rite of passage, it is permitted to rejoin its people.

Okay, let’s unpack all that… and set up a few ways to get the Githyanki involved in your game:

1. Here’s a possible lead-in for a scenario or campaign. The PCs could be tasked with protecting one of these creches. Or at least investigating it. Maybe the Githyanki there have broken with their tradition of self-sufficiency to ask for outside help. The Monster Manual clearly conceives of them as Spartans, so a plea for assistance from them should be troubling in and of itself.

2. To me the big “coming of age” Mind Flayer hunt sounds like a tightly focused ready-made one-shot adventure. Naturally everyone needs to play a Githyanki, unless you want to throw in an Elven or Dwarven guide. Come up with one good curveball for your story and you’ve got yourself a potential winner of a game.

3. I’d love to know what happens if you’re a Githyanki and can’t summon the courage to kill a Mind Flayer, or if you simply fail in your attempt. Clearly you’d end up some kind of outcast. But there are fascinating choices to be made here! Are such Gith a different caste? Do other Gith treat them as dead or non-entities? Are they exiled? Handled properly you could make one hell of an awesome character background around your answers.

According to their listing, Githzerai run monasteries that occasionally accept outsiders. If you’re looking to run a one-on-one campaign, this is a great and time honored story, the outsider seeking the enlightenment of another culture. If nothing else this would make a unique background for that monk you want to play.

Things were a little easier this week, but mostly because my wife was on her Spring Break from teaching. Our online learning keeps evolving, so we can never really get into a routine. Change on top of change is a lot to ask a 7-year-old to handle.

Still, we press on. If anything, Xander was a little more excited about our reading this week. Whatever helps the little guy get through this.

4 weeks of homeschooling down, and 7 still to go.